I realize she’s inside me, my enemy within, but I see her as separate from me somehow. I picture her as an older sister, which I don’t have but which I am, and she has my worst qualities as an elder sibling: a demanding know-it-all with a need for control.

I don’t see any of the redeeming qualities I might have as a sister in my inner sister. I’m not sure what these might be, but I imagine I do have them because my outside sister, who does not live in the same body as me, seems to like me. She invites me on vacation and comes to visit me sometimes.

My notion of being a sister is heavily influenced by my experiences growing up when my sister and I lived in the same household. We shared a room and my sister would borrow my stuff, both of which I resented. I guess I’ve never viewed myself as a particularly good sister because of these feelings of resentment.

My inner sister and I are at odds right now over some things. I think she’s a perfectionist who blows things out of proportion and her behavior has led to our current state, while she blames me for not being careful enough and making mistakes.

I realized this week thinking about her that we both want the same things–less clutter in our lives and a willingness to let go of the past. She wants to go about it in a way that’s just right. I, on the other hand, just want to get it done but am afraid of her wrath if we don’t do it her way (she can be a meanie). I’m hoping we can find a way to compromise.

When I was upset about sharing a room as a kid, my mom, who hadn’t always been able to live with her sisters growing up, would say one day I’d look back on the experience fondly. I’m not quite there yet, but I will say that I’m thankful that sharing a room with my outside sister offered me practice in sharing a body with my inner sister. And I’m going to give some more thought to how I’ve been a good older sister because I think my inner sister could be one too.

My parents have a tradition of naming new pets after old pets they resemble. They’ve had two dogs named Piggly and three Siamese cats with variants of the name Clam: Pismo C. Clam, Clamboy, and George Clam Dickel. There was a Mama and a mini Mama–mom and daughter cat look-a-likes. There was only ever one Darcy, a beautiful brown Burmese cat I considered mine even though technically she was my parents’ cat.

When Darcy died, I thought I’d never love a cat again. Allergies prevented me from getting a cat of my own. But then came Toes.

Toes was a neighborhood cat who wandered into our yard. My first thought when I saw her was that she looked a lot like my parents’ cat Socks, who had recently passed away. But whereas Socks had a full set of white socks complementing his black coat, Toes had white socks on her back paws but on her front paws only her toes were white.

“Toes!” I called her in honor of Socks.

Like many well loved cats, Toes has an official name, Toes, and a nickname we often call her, Sweet Girl. This isn’t because she’s an overtly sweet cat. As you can see from the picture below, she has a rather gruff exterior. But if there’s one thing I’ve learned from Toes, it’s that you can be a nice cat and still advocate for what you want. Being sweet doesn’t mean being a pushover.

Inspired by this collection of vintage photos of people with their Christmas trees, I dug through some of my old photos and found this:

Me with my mom and my sister sometime around the mid-90s.

Feeling thankful today for holiday traditions–both old and new. And speaking of new, it’s about time for me to have a Christmas breakfast Bloody Mary.

I’m visiting the Pacific Northwest this week with my mom and sister. Last night, we were playing the game Heads Up! (check out the app if you haven’t heard of it–so much fun!).

I was trying to get my sister to guess “Tooth Fairy” and gave her the clue “the man who comes into your room and puts money under your pillow.” She heard the first part and guessed “Santa.” After she’d guessed correctly, she asked me, “what did you mean, man?”

And that’s when I discovered my mom and sister imagine the tooth fairy as female while I’ve always thought of him as male.

What do you think? Is the tooth fairy a dude or a lady?

When I think about my dad, the picture that pops into my head is one of him reading a book on an armchair with a cat in his lap. I think it’s his most natural state and certainly the primary image I have of him from my childhood.

My dad reads a lot, as does the rest of the Zureick family. At family gatherings, everyone brings their own reading materials, and before or after dinner, it’s totally acceptable to withdraw from the conversation and read. I like this about my family, our intergenerational commitment to the written word.

When I was a young, my dad would take my grandmother, my sister, and me to the library every week. Now that I’m embarking on a writing career, I’m especially thankful to my dad for his dedication to this activity. I may have waited until my thirties to become a writer, but I’ve been a reader my whole life. 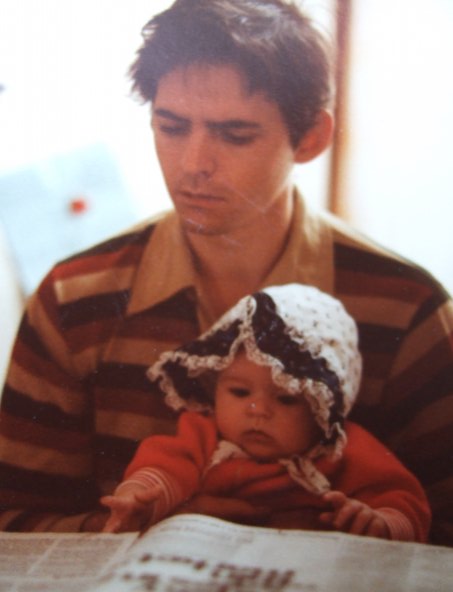 In the week leading up to Mother’s Day, I wrote a series of posts detailing the ways I’m like my mom (here, here, here, and here). Since Father’s Day is this coming Sunday, I’ll do the same for my dad starting with a very general observation: we look alike. Here’s a photo from my wedding to prove it.

I feel like “we look alike” is the kind of response you give if you don’t have anything in common with your parent, but my dad and I share a lot of traits. So stay tuned.

Not only did my mom help me plan my wedding, she grew a garden to create the perfect setting for the ceremony. She’s always gone above and beyond for me, and I’m so grateful for her support.

p.s. How cool does my mom look in her MOB attire?

My mom inspired my love for the stage. When I was in grade school, she would direct our school plays and talent shows. Sometimes we would have a script, but most of the stuff was student led. My mom would start the rehearsals with improv games, and eventually we’d come up with sketches and dance routines as a group. I remember playing Cousin Itt in an Addams Family sketch, a mummy in a “Walk Like an Egyptian” dance routine, and one of the most feared nuns in my Catholic grade school’s history. The shows were silly, fun, and empowering for us kids since we played a major role in creating the sketches.

Before I was born and when I was very young, my mom was part of an improv troupe in Cincinnati. She told me recently that she was once in a scene where she pretended to be George Carlin’s pregnant mother parachuting from a great height. So now I know my first improv role: George Carlin as a fetus.

Something that has always impressed me about my mom is her ability to set people at ease. Even if she’s not performing in the traditional sense, she still has a way of entertaining a crowd with stories. I’m glad to be like her in that respect.

A photo of my mom from her improv days: 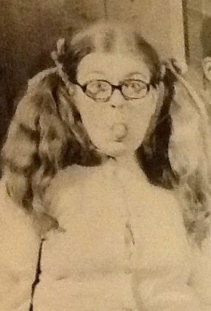 Me performing improv with my group Shark Party at the SweetWater 420 Fest:

My mom loves shiny things. When I was in college, we both got into beading and made dangle earrings. We called them “man lures.” Lately, she’s been producing yard ornaments, decorative windows, and felted wool animals. She’s the queen of DIY bling. I’m grateful for the times we’ve gotten to work on projects together as well as the decorative gifts I’ve received from her. 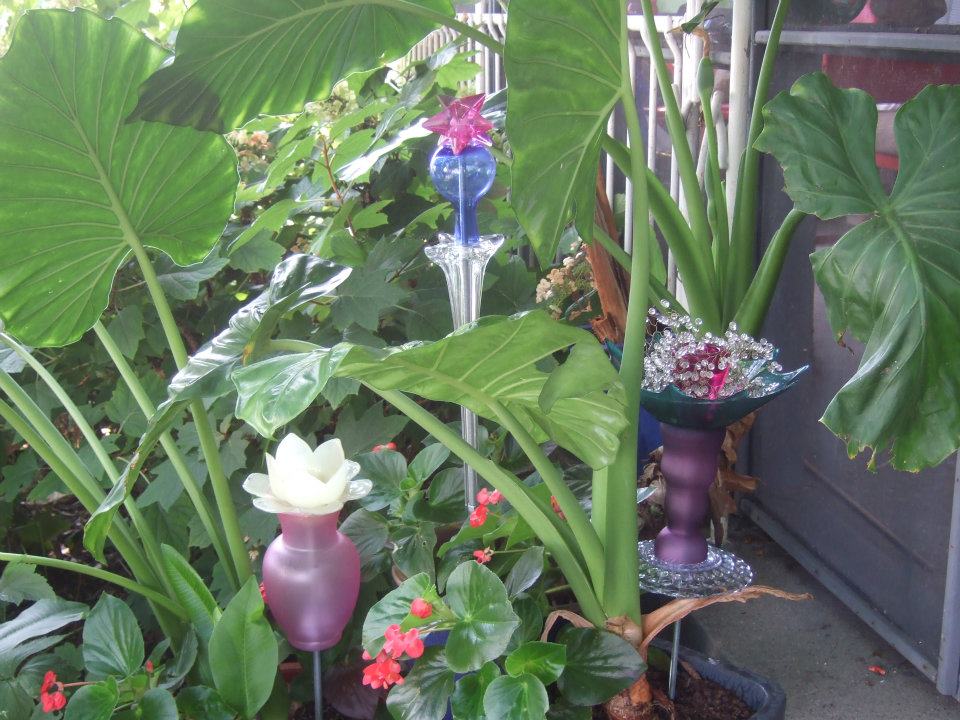 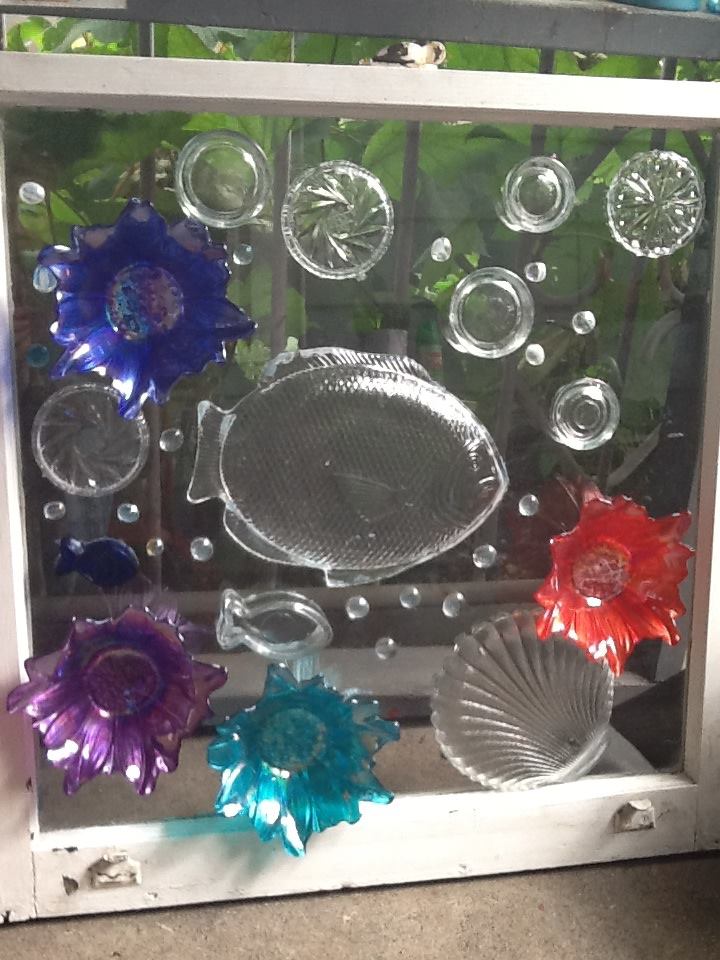 A felted frog I made hanging out with a squirrel my mom made for me: 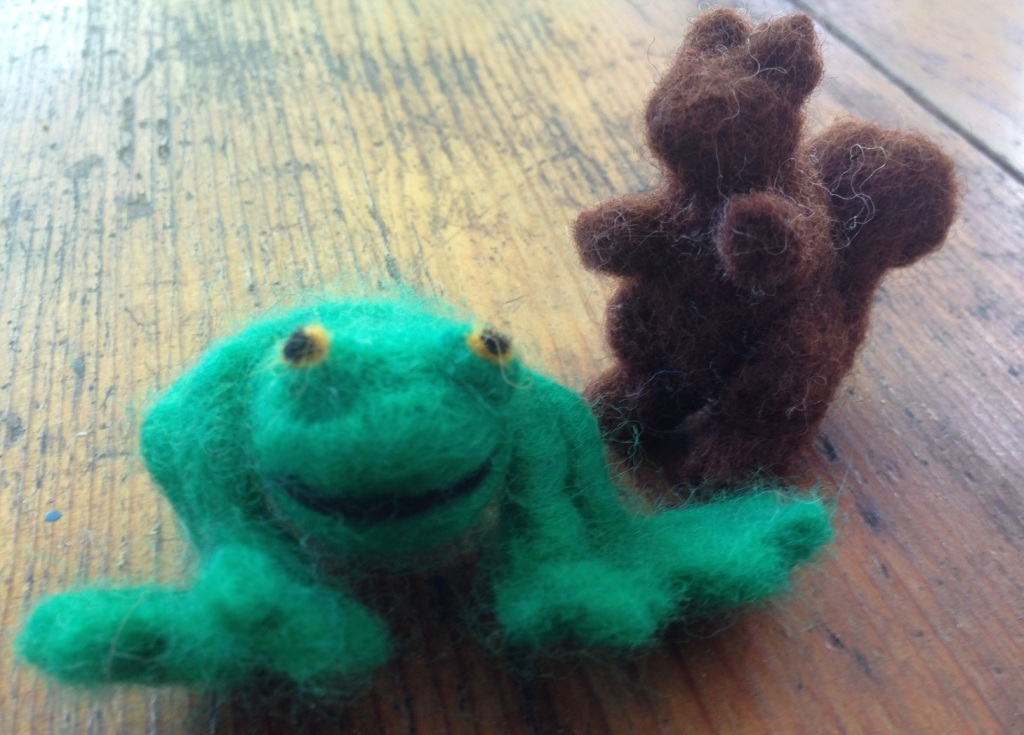 My mom loves camping. We went a lot when I was growing up, mainly to places in Ohio where we would tent camp near our car. I remember being in awe of my mom’s ability to pitch a tent, start a campfire, and make delicious meals on a two burner propane stove.

Although we haven’t gone camping together in years, we have had the good fortune of visiting some of America’s most beautiful national parks recently including Grand Canyon, Yellowstone, Yosemite, and the Great Smoky Mountains. Last autumn, we visited Gatlinburg and took a short but steep hike to the top of Clingmans Dome. The views were gorgeous. While we were there, we also hiked a small section of the Appalachian Trail.

My mom really wants to take a backpacking trip along the Appalachian Trail in the Shenandoah Valley region. I’ve never gone backpacking. The prospect scares me, but I hope I’m with her when she realizes this dream.